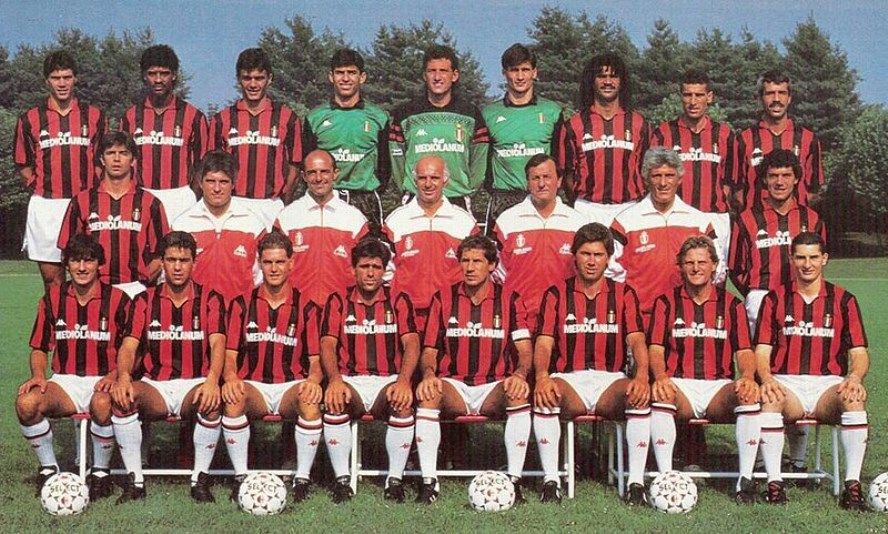 The 1988/89 Ac Milan team, led by the great Arrigo Sacchi is considered to be one of the greatest club teams of all time. Due to this, I decided to write this tactical analysis about one of their most iconic matches ever; their 5-0 humbling of my favourite team, Real Madrid in the 1988/89 European cup semi-final second leg.

First of all, some context is needed. That Milan team were the reigning Serie-A champions and had the mercurial dutch trio of Van Basten, Gullit and Rijkaard alongside the likes of Maldini, Baresi, Ancelotti and Donadoni, while the Real Madrid team they faced were the greatest Real Madrid team to never win a Uefa Champions league/European cup; the Quinta del Buitre. That Real Madrid team was the one that had managed to win five league titles on the bounce, lead by the famed homegrown quintet of Emilio Butragueño, Sanchís, Rafael Martín Vázquez and Míchel, supported by the likes of Bernd Schuster and Hugo Sanchez.

Real Madrid on the other hand started with an eleven of Buyo, Chendo, Gordillo, Michel, Sanchis, Llorente, Burtagueno, Schuster, Sanchez, Gallego and Vazquez.

From the off, Milan’s game plan was clear to see. They pressed high in a manner akin to current teams such as Manchester City or Liverpool. Everytime Madrid played the ball back to their keeper Buyo, the whole Milan team moved forward in unison, creating an incredibly high line. More often than not, the last man; Baresi was at the half way line. This forced Buyo to go long every time he had the ball, and his pass was either intercepted by a Milan player or it went out of play.

Whenever Real Madrid did manage to get the ball into the midfield, Milan crowded them out in a very unorthodox fashion. The 4-4-2 the lined up in morphed into an almost 2-8 formation with Maldini stationing himself very high and wide and the front two, Van Basten and Gullit dropping in deep. Gullit performed somewhat similar to a no.10, dropping deep centrally while Van Basten dropped deep as well, but moved towards the left wing alot, which helped Milan have almost 8 midfielders and no strikers. This incredible overcrowding of the midfield helped Milan win back the ball time and time again as at times almost three Milan players pressed 1 Madrid player. After Milan won the ball back, they would keep a hold of it, playing simple passes, but due to their sheer numerical superiority, Madrid found it very hard to win it back. 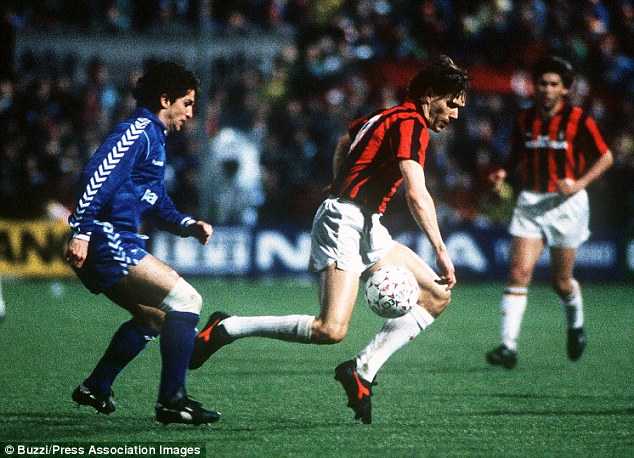 One common aspect of Milan’s play was that they used the superiority on the left hand side with Van Basten, Ancelotti and Maldini to keep a hold of the ball. This forced the Madrid players to move on to that side, leaving the right wing open. Almost every time this happened, Milan played a long ball to the right wing, giving Colombo acres of space to run into. However, the only time in the first fifteen minutes or so Milan genuinely looked threatening was when they switched play through a quick series of passes in which they played the ball centrally and then wide until a pass by Donadoni found Colombo in acres of space near the Madrid box, but due to a poor touch by Colombo, the ball went out of play.

In the seventeenth minute, Baresi tried to find Tassotti on the right wing with a long ball, which was intercepted and headed out. Through the following throw in, Gullit attempted to beat a couple of Madrid players but lost the ball near the halfway line. However, due to the 3 v 1 pressing scheme Milan used, Tassotti won the ball back immediately and fed it to Gullit. Gullit, who was still under pressure, beat one man and played it centrally to Ancelotti. Ancelotti then proceded to calmly beat two Real Madrid players and launched an absolute howitzer of a shot that beat the keeper and dipped into the goal from 25 yards out. 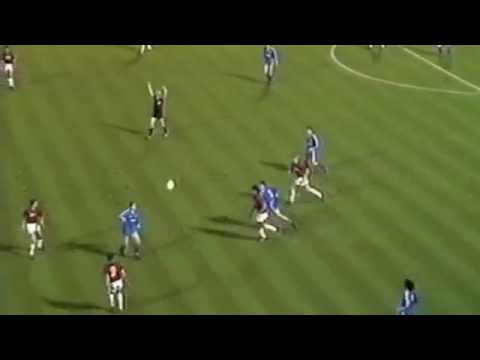 This picture was right before the Ancelotti goal. You can see how the moment a Real Madrid player is about to receive a loose ball, three Milan players hone in on him. Tassotti won the ball back in this incident and gave it to Gullit.

Around six minutes later, with the same pressing methods, Milan won a series of three corners. The third corner was played short to Tassotti, who put in an absolute peach of a cross that Rijkaard duly headed in. 2-0. 24 minutes.

In the first 25 minutes, one thing that stood out was Real Madrid’s attacking, or lack-thereof. Every time Real managed to beat the midfield press, Milan reverted to a 6-3-1 formation and did something I had never seen before. The back 6 lined up incredibly flat and moved up in a unison, towards the player who had the ball, as long as the player wasn’t wide. If the Madrid player was wide, then he would be pressed by 2 Milan players, but if he was centrally located, the whole back line moved towards him. This lead to the entire area behind them being offside. In the first 25 minutes, Madrid were caught offside three times due to this, and whenever the player with the ball tried to hold on to it to wait for a runner, he was harried by the Milan players and lost the ball.

In this picture, it can be seen how Milan absolutely hounded and surrounded any Madrid player on the ball. Maldini, the left back moved inside while the center backs closed in on him. The midfielders also surrounded the Madrid attackers, creating a 2 v 6 situation.

After the second goal, Milan eased up on their pressing, but still faced little to no trouble, due to their overloading of their half. One very striking aspect of Milan’s play was that every time they won the ball, the first player they would give it too was Ancelotti, who seemed responsible for all their transitions. He either held on to the ball until the attackers could make runs or drove on with the ball himself in a manner similar to the box to box midfielders of today. Ancelotti also was a very good dribbler and constantly beat Madrid players, something that I had not expected of him. Moreover, Ancelotti often received the ball in the left half space or left wing, which was very odd. Something even more odd was Maldini’s tendency to move centrally into Ancelotti’s area. Today, we see alot of fullbacks moving centrally, especially in Guardiola’s teams, but what Maldini took it to an extreme. He often ran straight through the middle of the pitch, like an attacker making a run during a counter attack.

For a ten minute spell, Real Madrid actually dominated and attempted to attack via the wings. They even created one very good chance for Vazquez via a Gordillo cross that Vazquez really shouldve scored. However, on the brink of half time, Ancelotti intercepted the ball near the half way line and played it to Donadoni, who played it to Gullit near the edge of the box. Gullit played it back to Donadoni near the by-line, and made a run into the middle. Donadoni shifted his fullback and sent in a cross that Gullit scored. 3-0.

The fourth goal soon followed. Maldini played a pass forward that Van Basten dropped deep into the left half space and played it back to Donadoni. Ancelotti and Rijkaard then created a square with Donadoni and Maldini, outnumbering the Madrid midfield. Rijkaard received the ball and sent a long pass into the Madrid box that Gullit headed down for Van Basten, who had by then moved to the right hand side, and then finished into the top corner.

After the goal, Real Madrid still tried to attack Milan, attacking via the wings, but Milan’s tactical superiority halted any possible Madrid attack. Milan kept hold of the ball for long periods of time by simply outnumbering Madrid. Unlike today’s teams, who use triangles to hold on to the ball, Milan formed squares in the pitch, with an almost childish disregard for positional discipline. Van Basten, who is so often called the spearhead of that team, dropped deeper than his midfielders to receive the ball. Gullit, Van Basten’s strike partner roamed the pitch, moving to whichever area had the ball. And whenever Madrid’s defenders followed the two into midfield, one of Milan’s midfielders or fullbacks, usually Maldini on the left and Colombo on the right made a run into the channel. The incredible technical ability of the Milan players also helped them a lot with regards to maintaining possession. It seemed as though every single player was confident enough to dribble out of a tight space, and over the course of the match, every single player besides the keeper had dribbled past an opponent at least once. Every player was comfortable in holding on to the ball, something rare even in today’s teams.

Moreover, Baresi, who is famed for being a rough and tough defender of old played in a way that puts even the best of today’s breed of center backs to shame. He constantly found wide outlets, especially Colombo or Tassotti on the right with his long balls, surged forward whenever possible while helping recycle possession.

Gullit had to go off in the 55th minute due to a knee injury and was replaced by Paolo Virdis. Soon after, Milan won a corner, that was played short to Donadoni, who took it to the edge of the box and unleashed a low rasping drive that snuck in at the near post. 5-0. 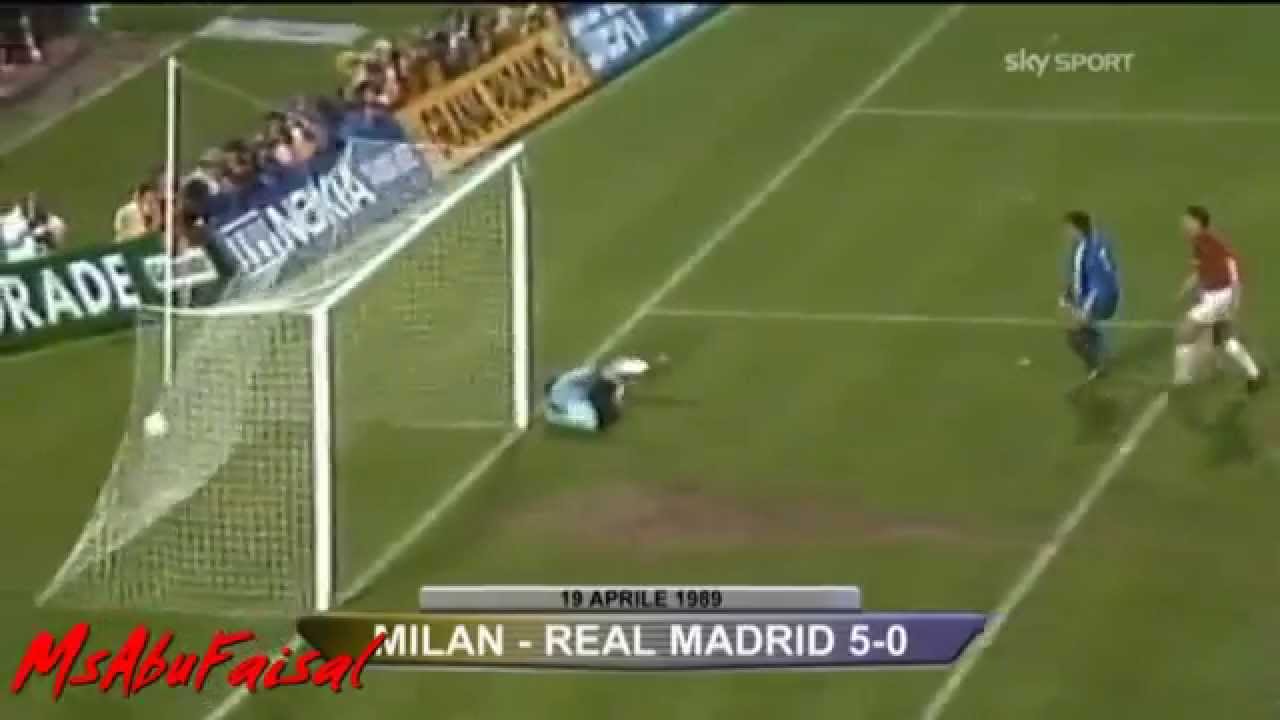 After the fifth goal, the match really died down. Milan no longer pressed high up with the same intensity and Madrid lost all hope of getting back into the match. Besides a few long shots, both teams didn’t have any big chances after the 60 minute mark.The last 30 minutes or so were completely dominated by Milan, who kept hold of the ball but didn’t do much with it.

Never had I ever seen a team completely shut down another team so effectively. Milan very rarely tackled or fouled, yet they constantly won the ball back by making Madrid lose it by simply harrying them. Besides one dubious penalty call, Madrid never made any real foray into the Milan box, while Milan constantly found outlets in dangerous areas.

The positional fluidity of the Milan players was also incredible. All the methods that Pep uses today were clear to see in that Milan team. Fullbacks were inverted and stationed themselves in the central areas, the strikers operated as pseudo-wingers and midfielders, the central midfielders attacked through the wings while the center backs operated extremely high up the pitch. For large periods of the game, Milan played with 2 defenders and no attackers, and other times they had fullbacks and midfielders attacking through the wings. The Milan team had well and truly outclassed Real Madrid that night.

Some final tidbits about the match: